Soprano Lauren Fagan was filmed live in Dimension's London studio, and the resulting volumetric capture lives as a digital character in a boundless virtual world. The film pans the singer, showing her performance from any viewpoint and demonstrating the sheer depth of her epic space-like environment.

Supermodel Adwoa Aboah featured in a fully immersive fashion show designed to awaken all the senses. These included spatial audio, haptic feedback, a 46 metre projection the length of the runway, and an array of aromas. Contribution: Post Supervisor in Production and Technical Artist in Post-Production.

The National Theatre’s musical VR experience All Kinds of Limbo transports audiences into a theatrical world inspired by the influence of West Indian culture on the UK music scene. Contribution: DIT in Production and Technical Artist in Post-Production.

This mobile AR tour immerses visitors in the sights, sounds, and colourful stories once hidden in the past of UNESCO World Heritage Site Changdeok Palace. I captured and post processed the actors.

This interactive VR experience is based on Sky Atlantic’s second series of Britannia and viewable with VR headsets. A Roman army returning to crush the Celtic heart of Britannia, a mysterious land led by warrior women and mighty Druids. Contribution: Photogrammetry, Volumetric Capture and Post-Production.

On this volumetric frame of myself I tested artistic 3D lighting options for volumetric captures in SideEffects Houdini. It is an A-Pose on a turntable and it was used as R&D test. There is no movement recorded in this capture.

Volumetric capture was used for a new golf free-viewpoint swing analysis at the 148th Golf Open Championship by Sky Sports. The golfers were filmed in MRMC and Dimension’s Polymotion Stage, the world’s first mobile volumetric capture studio. Contribution: Stage set up as DIT in Ireland and work as Technical Artist in London.

Jeff Wayne's  immersive experience gives the audiences the chance to live through a Martian invasion of 1898. Several Volumetric Captures of actors were recorded at Dimension Studio in London for this experience. Contribution: DIT in Production and Technical Artist.

The talented sisters and digital Influencers Yarah and Norah danced Funk and HipHop at Dimension Studio in London to make an Augmented Reality Dance app called Dance With Us.

The Viking Planet is a new entertainment centre in Norway vividly recreating a lost 9th century world. This VR drama developed by Dimension brings to life the tough and violent world of the Vikings a thousand years ago. Contribution: Volumetric Capture and Post-Production. 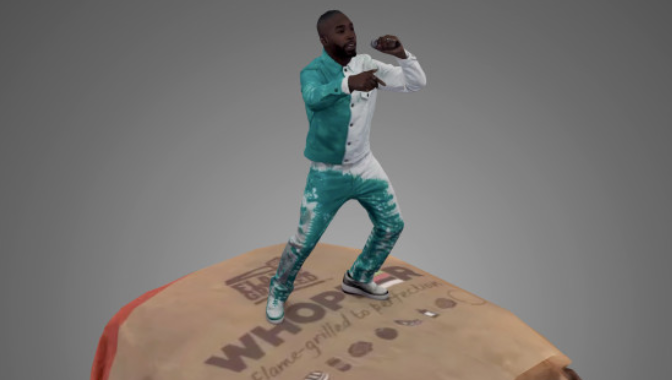 Burger King customers were able to scan a special QR code on their Whopper burger to generate a virtual miniature of UK rap artist Tinie Tempah, performing his latest hit Whoppa, with the iconic signature burger as his stage. Contribution: Compositing